In recent years, there have some published works that have been categorized in ways that can leave me puzzled. Probably the biggest one is the genre that I would say is Christian Living, but categorized as devotion. So when I signed up for a free copy of Truly Known, I went in with little to zero expectations. Does this sound harsh? Can we talk about this for a minute before I get into the review?

When I hear devotional, I think of a bible verse, preferably more than one–, and then some kind message to illustrate how that verse works or plays out in life, and through this whole devotion, we grow closer to our Lord and worship and praise him.  The actual definition of worship is, “of or used in religious worship.” Many “devotionals” sprinkle half a verse, and then use it out of context to more or less worship their own experiences and reflections on life.  So, now did this devotional fall into the former or latter category?

“Friend, you won’t find deep theological writings in between  these pages. My goal is to make some of the harder truths found  in Scripture more understandable to the common, finite mind  and heart. I don’t write as someone who knows all the answers  but rather as someone who is ready to come alongside and cheer  you on in your daily walk with Jesus. If you garner just a little bit  of encouragement from these devotional words, I will be thrilled.  May the Lord continue to be glorified in all of our lives! “

I actually opened the book up to that quote above and was pleasantly encouraged by the author’s assertion that she is trying to illustrate scripture truths in a simple and tangible way for the every day reader. I really appreciated this and to be honest, if I had skimmed over this introduction, I would have missed this and actually given this review a much lower rating. Author Jayne Martin Patton somehow managed to take Christian Living and Devotional and blend them together well. It’s simple for beginning Christians and short enough for a 2 minute read between meals for those of us grabbing a refresher between breaks and lunches. I struggled a little bit with some of the speculation made about people that the Bible remains silent on, like the servant girl in Naaman’s story, but I always struggle with that– always.

I researched about what people look for in a devotional and this fit many of those people that are seeking biblical encouragement and inspiration. And again, like the introduction stated, this is not an indepth one. Because of this, I feel confident to say that I give it 4 stars. I liked it. I would share it with a few close friends that I know would be blessed by it.

MY biggest thing is to see if it’s scripturally sound, and I did not read anything that stood out to be as being in error of scripture. That is the highest remark I can give any author.

Truly Known is on tour with Celebrate Lit. 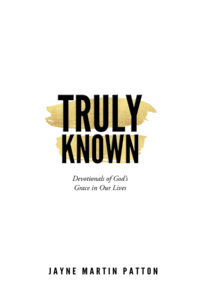 Knowing God—really knowing God—often seems like an impossible endeavor, especially when we hardly know ourselves. Jayne Patton saw that truth firsthand after ministering to women at a maximum-security prison. And soon she realized that women everywhere—even sitting in the church pew next to her—were living in emotional, spiritual, and mental prisons within their own hearts and minds.

Truly Known invites women of all ages and stages to discover the life-altering freedom that God richly provides them, so that they no longer have to live within their own prisons but can be transformed in the presence of Jesus. Readers will be asking “So now what?” as they are empowered to snatch each moment and each day that God gives them to make a difference in the lives of others.

All proceeds from Truly Known will be donated to Samuel’s House, an orphanage in Venezuela that seeks to feed, shelter, educate, and evangelize children, bringing life to their souls. 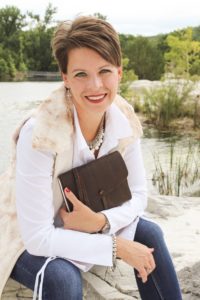 Jayne Patton loves crossing over denominational divides to bring the gospel to others in a way that is powerful and relevant. With over twenty years in women’s ministry, she has previously served as a women’s ministry director, worked with government officials in the plight of persecuted Christians worldwide, ministered to women behind prison walls, and more. Jayne is a popular speaker at churches, women’s events, and MOPS groups. She and her husband, Mike, have three children. Jayne loves to read in her spare time, can always be bribed with Mexican food, and never turns down a double-stuffed Oreo. Learn more about her at www.alteredministries.com.

Let’s be real, prison ministry was never on my women’s ministry vision board. I didn’t lay in bed as a little girl and dream of going behind bars. I didn’t grow up knowing a single incarcerated person, my modern-day world didn’t include those who had been incarcerated, and I never thought it would be the thing that would change my entire life. Until 2017. In the fall of that year, I was given the opportunity to begin ministering weekly at a maximum security women’s prison in Missouri and remember thinking at the time how much it would bless those inmates if I would teach them the word of God. I couldn’t have gone in with the worst motivation. You see, it was the Lord who was bringing me there to be blessed and taught by them!

I soon discovered that Jesus was working hard in the hearts of those women and they were being transformed into Christ’s likeness unlike anything I had ever experienced within the church walls. In fact, I was so dramatically impacted by what I was experiencing, the Lord prompted me to launch a women’s conference style ministry entitled “Altered Ministries”. My ministry team and I began hosting women’s events at local churches sharing the same messages we were bringing to the women in prison. It was remarkable what God began doing! Lives were being restored, addictions were being shed, and relationships were being renewed!

As Altered was moving full speed ahead, I began writing short and pointed daily devotionals for those just beginning their walk with Jesus. Those short devotionals are what soon became my devotional book entitled “Truly Known”.  Why that name? Because God is the One who truly knows all the parts of us that we try to hide, and yet still desires that we draw close to Him. I could see His heart for not just the women sitting in church pews often held captive in prisons of their own making, but for the ones that were held behind very real bars. Jesus came to set all of us free.  My prayer is that “Truly Known” serves as daily encouragement that is easy to understand for the beginner and serves as a sweet reminder for the scholar.

For Him and My Family, October 10

Because I said so — and other adventures in Parenting, October 17

To celebrate her tour, Jayne is giving away the grand prize package of a signed book and $50 Amazon Gift Card!!

6 thoughts on “Did I Find This Devotional To Meet Devotional Standards?”