Links on this post may be affiliate links for which I receive compensation from the owner of the website.
3shares 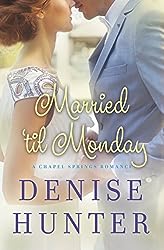 Excerpt from cover;
With a big anniversary party in the works for his ex-wife’s parents, Ryan has just one weekend to play Abby’s husband . . . and win back the woman of his dreams.

Ryan McKinley has tried to move on from his ex-wife, Abby. He’s sulked, he’s gotten angry, and ultimately he bought her dream house. Big mistake. Living alone in the massive two-story has only made him miss her more. When her parents call him out of the blue about their anniversary party in Summer Harbor, Maine, Ryan believes God has dropped a golden opportunity straight into his lap.

Then Ryan shows up on her doorstep, looking as handsome as ever. When he insists he’s going to Summer Harbor, with or without her, Abby knows she can’t say no. Her parents still think they’re married and now Ryan knows it too. It’s just a one-week road-trip with the man who broke her heart. What could possibly go wrong?

What could go wrong? I found this book to be a little too dramatic for my taste at first. It was really hard to really get into Abby’s character when I just wanted to slap her silly.  They say, “Do not judge a book by it’s cover”, I say, “Wait til you’ve read the whole book before making a judgment on the character.”  Once I got towards the middle of the book and more muddled waters became more clear, I began too see something merge from the hidden message found within its pages.  We all carry scars within us and some that are more deeper than others can mold and shape us in ways that I can’t even comprehend. Such is the case for Abby. I mention this because there were times when I was ready to give up the book but I am glad I pushed through and the more involved I got within its pages the less I wanted to give up the book.

It was more on the romantic side of Christian fiction than I am use too. Ryan seems a bit of a tease when it comes to his ex-wife but I actually loved that silly side of him that could make tense scenes a bit more relaxing while still maintaining a sense of human desire for this beautiful woman beside him.  Thankfully the dog is the chaperone for this story, so all was kept clean.

Would I recommend this story? I think it would be a very good summer read. There are days when I want to wind down and turn my brain off and this book provided the excellent escape. I have read previous books by Denise Hunter and I very much enjoy this author.  I would not go as far to say that this was her best work but I did find true enjoyment in it and would happily read it again at some point. As a matter of fact, since writing this review, my interest has been sparked again and I am eager to read it again with fresh eyes.