When I first signed up to read and review Shadow, I didn’t have any idea what I was getting into. I have been trying to be more open about fantasy and dip my toes into a genre that I don’t normally read. I do not recommend starting with this book, which is the second in the duology.  Dust is the first one and we’re introduced to the characters and what I would say is the setting for the second book, Shadow.

Shadow is darker than the first one but I don’t think its any worse that what I would assume Lord of the Rings to be (yeah, I haven’t read that either). But honestly, it really didn’t bother me. YA tends to have darker themes and I think it goes along with how Swanson opens up her book when she quoted G.K. Chesterton, “Fairy tales do not tell children the dragons exist. Children already know that dragons exist. Fairy tales tell children the dragons can be killed.” These are stories that the maturing youth gravitate towards as the change in responsibilities grow in their hearts and minds. It is not as simple anymore, and these books open that gateway for them.

Shadow will not be for everyone. I can see some more conservative Christians not wanting to expose their children to the dark themes and even some of the British language (that we would consider inappropriate).

All in all, I did enjoy this duology, more than I expected considering that this is based off of Peter Pan (not one of my favorite books, and it is dark if you haven’t read the original.) Peter is not at all like the character that Disney portrayed him, and I think Swanson did a much better job and I look forward to reading more by this author! 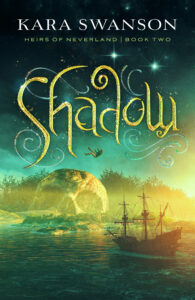 Peter Pan has crash-landed back on Neverland. But this is not the island he remembers.

Desperate to rescue Claire and the fractured Lost Boys, Peter must unravel what truly tore his dreamland apart. But with each step, he is haunted by more of his own broken memories. Not even Pan himself is what he seems.

Claire Kenton is chained to a pirate ship, watching the wreckage of Neverland rocked by tempests. When she finally finds her brother, Connor is every bit as shattered as the island. Claire may have pixie dust flowing in her veins—but the light of Neverland is flickering dangerously close to going out forever.

To rescue Neverland from the inescapable shadow, the boy who never grew up and the girl who grew up too fast will have to sacrifice the only thing they have left: each other. 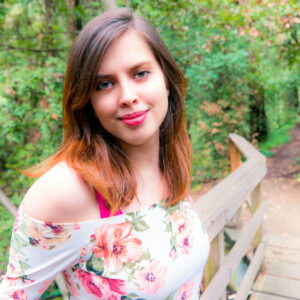 As the daughter of missionaries, Kara Swanson spent her childhood running barefoot through the lush jungles of Papua New Guinea. Able to relate with characters dropped into a unique new world, she quickly fell in love with the fantasy genre. The award-winning author of The Girl Who Could See, Kara is passionate about crafting stories of light shattering darkness, connecting with readers, and becoming best friends with a mermaid—though not necessarily in that order. Kara chats about coffee, fairytales and bookish things online (@karaswansonauthor) and at karaswanson.com.

One of my favorite CS Lewis quotes is this:

There’s something subtly profound about the idea that the very stories which captivate our imagination and shape our perspective on good and evil as children, will reveal more gems when we return to them later. When we’ve conquered some dragons of our own.

This was especially true when I write my Peter Pan retelling duology Dust and Shadow. These YA novels literally return to a fairy tale. I took a familiar story and dug even deeper, pushing Peter himself to grow a little more and see what new bits of pixie dust and hope there may be in a familiar story.

But there is another reason why our hearts gravitate toward fairy tales.

I think GK Chesterton put it brilliantly in a quote that is actually at the very front of Shadow:

Because maybe even more than being reminded of the whimsy of a fairy, we need the reminder that even in a world filled with dragons – they can be killed.

And that simple truth, told a hundred different ways, will always lift our hearts and our chins.

Shadow was not an easy book to write – and it is not a particularly lighthearted tale. It is raw and vulnerable and at times lives up to it’s title in some darker moments. But there is always a sense of courage there too. A reminder that even in the shadowed places, the valleys, the instances that steal our breath and twist our hearts and make us wonder if all is lost –

There is another page to turn. Another step to take.

We are not finished.

No matter how young we are, we can strap on our armor, lift our swords, and fight for the light.

We are not overcome because our strength does not come from us.

It comes from our King.

And in the end, He will make all wrongs right, and there will be a happy ending to our tale, even if it may not be the ending we expect.

Because it may not be easy to slay the dragon, but as the fairy tales do remind us –

The important thing is that they can be slain.

Inside the Wong Mind, July 31

Where Faith and Books Meet, August 4

For the Love of Literature, August 4

For Him and My Family, August 7

Through the Fire Blogs, August 10

Because I said so — and other adventures in Parenting, August 11

Cats in the Cradle Blog, August 11

Labor Not in Vain, August 13

To celebrate her tour, Kara Swanson is giving away the grand prize of a $25 Amazon gift card!!